It was a nice July summer, but at least here in Sweden, the really nice weather came in August! Hard to work with 30 degrees and sunshine outside. Also the continued social distancing and partly working from home has been a challenge. But we have some progress:

1 Test set up in Combain Office.

We complemented the 15 WiFi APs with 31(!) Bluetooth beacons. Now we have a beacon/WiFi for every 10m2. This is to test how far we can push RSSI positioning accuracy with different methods: Our Combain CPS lookup, Optimal trilateration, and Fingerprinting. Can we get any of these methods from the current 3-5m down to 1m and avoid using RTT in the next test area?

Combain CPS lookup is based on weighted probabilities of most likely position based on the RSSI measurements of beacons. The performance improved with the BLE beacons to about 2m median error. Very good, but still hard to get down to 1m.

Seems like all RSSI based give around 2m median error, even with this dense transmitter set up. Let’s focus on making the indoor map modelling algorithms robust enough to handle this magnitude of error.

See the featured image on top where we have used RTT measurements and optimal trilateration! By doing some algorithm improvements and new measurements we achieve around 1m median error also for tracks now, with “just” 15 APs in 400m2. Great!

4. Indoor path generation
Now we finally can start to do some new work on indoor mapping. The input data we use is the noisy optimal trilaterate with RSSI tracks as seen above. We start by creating a heatmap using a 0.5×0.5m grid.

Taking a few most likely positions from these 9 tracks and create the most probable paths between these points based on all tracks, we get the result in the right. Even with very noisy positions in the tracks, we still can extract some main paths. If we then discretize and group these paths, we get a very encouraging result, see below. 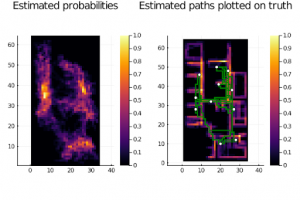 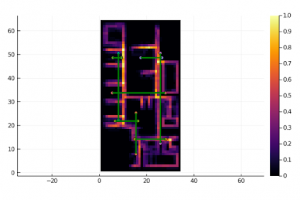 This seems very promising for finding the main paths in a building. Still looks hard to get details so we will try some other path generation methods as well. But maybe we do not need the RTT for the next test area?

The next test area will be Mattehuset at Lund University. A much larger and more realistic test environment and where we do not add any APs or beacons. We already started to collect data and it will be very interesting to see performance and trace generation. Stay tuned!